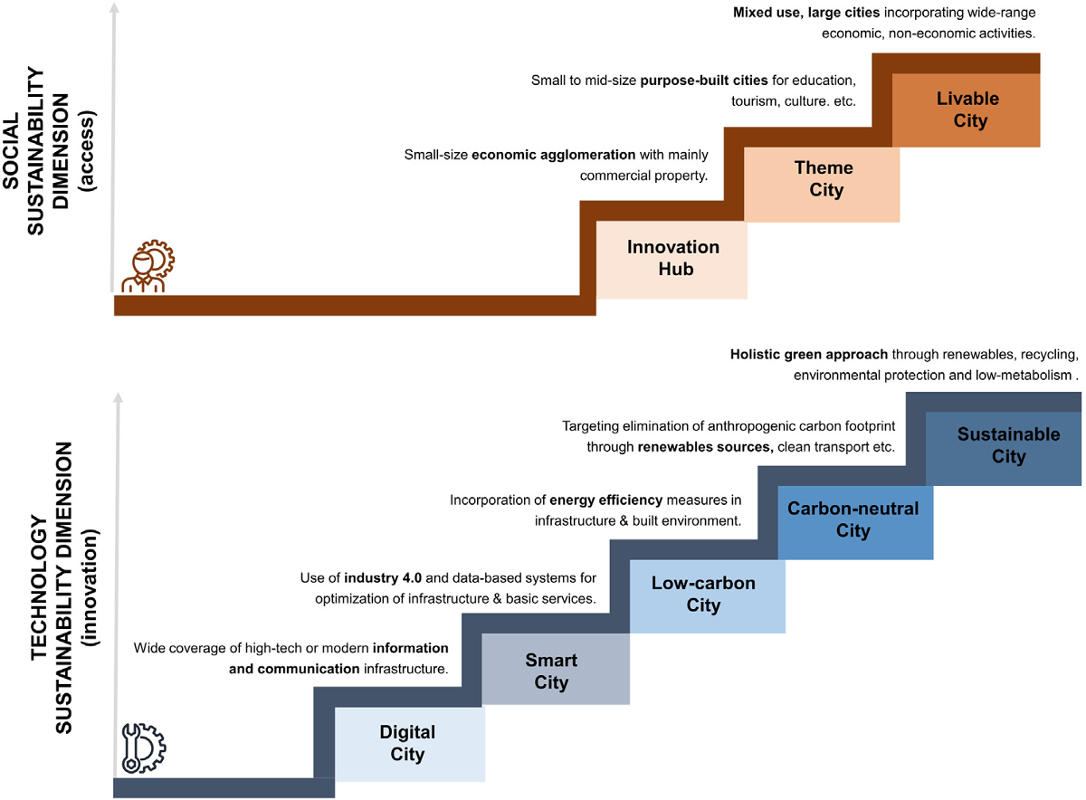 Cities of the Gulf Cooperation Council (GCC) region have harboured  impressive architecture conveying modernity and affluence. GCC countries are increasingly reshaping the face of their urban areas through the development of futuristic planned cities. These cities are competing for labels that show design innovations and energy-efficient technologies. This paper goes behind the headlines and self-labelling, and compares the region’s major planned cities in terms of the nature of the urban development models. It proposes a techno-social framework to characterize the cities based on the criteria of access and innovation. The assessment shows that most  developments resemble infrastructure upgrade via digital and smart cities. While ecological innovations are incorporated in urban design, they are limited to few livable cities. Most representative cities for sustainability are either small theme cities or yet to be completed. Economization and mega-events are largely fuelling urban development, with open outcomes on the success to attract long-term residents, and the level of contribution to the region’s low-carbon future. 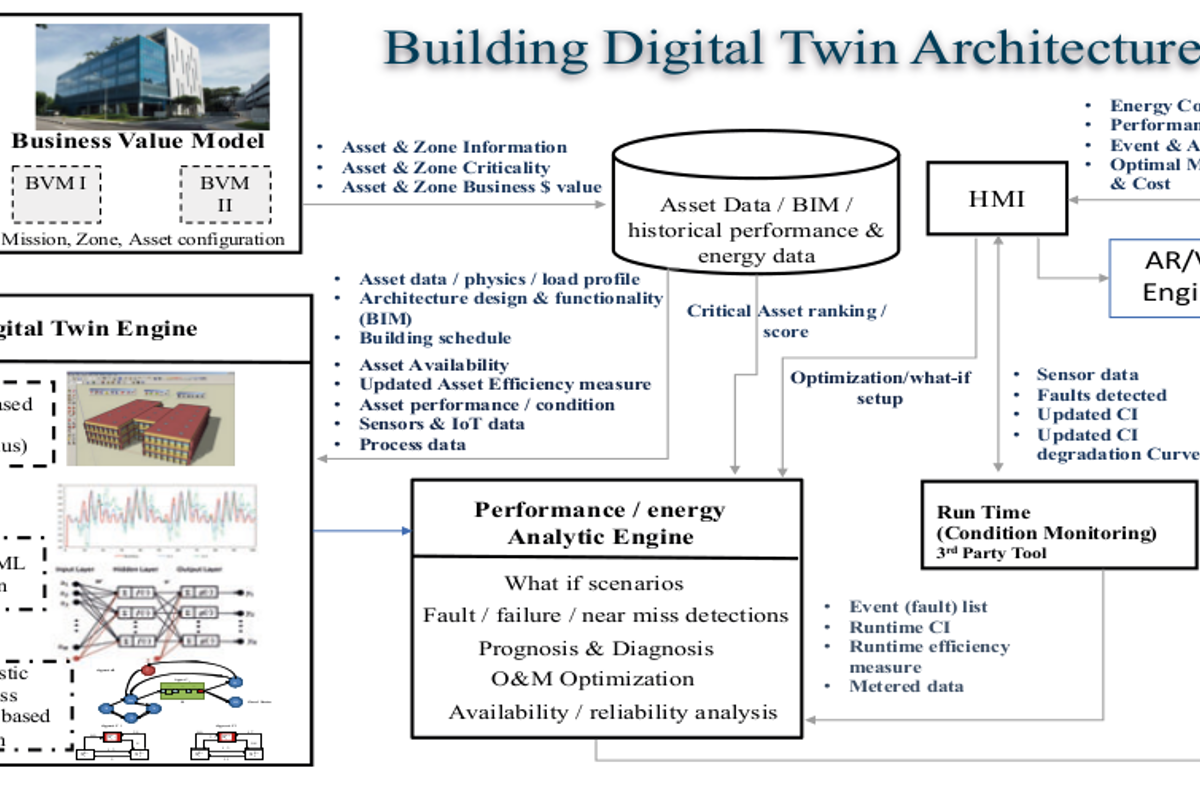 This article presents a novel architecture by integrating the existing asset management theory with building simulation technology for effective maintenance strategies and operational control schemes. Building performance, value and energy usage collectively define the criteria for optimization. Building assets are partially or fully connected with building IoT and their real time conditions are accessible at all times. An asset’s value is derived from the functional contributions of that asset to the overall business objective of the system that it is part of. The architecture consists of digital twin, analytics and Business Value Model engines and in-between gateways for data exchange. The paper provides illustrative examples, some based on real data, how the platform can serve operations and maintenance objectives of existing and new buildings.

Road safety is a significant public health issue in the State of Qatar resulting in a huge humanitarian suffering for individuals, families, society and the government. Arab Gulf countries have a higher road accident fatality rate, highest is in Qatar, compared to North America and European countries. Qatar residents are five times more likely to die in vehicle accidents than from a stroke, representing the highest ratio in the world. The number of vehicle accidents has outpaced the country’s population growth over the past 18 years. Average of 65 percent of deaths in Qatar, are among children aged 14 and younger are caused by road accidents. Fifty-four percent of all deaths among children under the age of four in Qatar is caused by traffic accidents. Such death rate in the country is three times higher than the global average among children. Qatar National Vision 2030 aims at reducing road accidents and improve safety through a holistic strategy of raised awareness, better safety measures and firmer laws that achieve several fundamental and crucial objectives. Improved protection of children and young people who are significantly overrepresented in fatality statistics has been identified as a basic objective for the country’s national vision. The use of seatbelts and child restraints while travelling in a vehicle has been identified by the Qatari National Road Safety Strategy 2013-2022 as one of the primary ways of reducing death and injury. The national strategy will introduce high priority legislation on seatbelts in the rear of vehicles and the use of child restraints as a main action for seatbelt use.

Deaths due to car accidents can be considerably reduced by utilizing Baby/child seats and booster seats, for babies, toddlers and older children. The use of safety seats, that are specifically designed to guard babies or children in the occurrence of a crash, can decrease the risk of death among infants by 71 percent and among toddlers by 54 percent. Furthermore, the use of car safety seats can also decrease the threat of injury by 59 percent for children between the ages of four to seven. As with education around seat belt usage in Qatar, education campaigns on car safety seat usage must use a bottom-up rather than a top-down approach in order for them to be successful. In other words, current Qatar parental behaviors, knowledge, and attitudes about car safety seats should be studied as a basis for development of appropriate educational interventions related to their usage, rather than government or other interventions that have not been grounded in research that has been conducted on the residential population.

In order to design effective and comprehensive awareness and educational campaigns targeting parents and future parents in Qatar, it is necessary to understand current parental behaviors, knowledge and attitudes around car safety seat use or non-use. With a clear understanding of behaviors, knowledge, and attitudes it will be possible to develop educational interventions that will have the greatest potential to impact behaviors. In this study, the usage of car seats within the residence of Qatar with children currently under the age of 12 is evaluated in order to develop insight into this safety-related behavior that effects vulnerable road users (young children). The main objective of the study is to provide a comprehensive understanding of road safety culture and norms related to car seat usage by Qatari residents, a research topic that has not formerly been considered in the State of Qatar, in order to inform effective and comprehensive interventions to embolden car seat use, both legislative and educational. To achieve the study objective, a survey instrument was designed and utilized. The survey included a set of questions related to demographics (nationality, age, age of children, education level, etc.), a set of questions to assess parents’ car safety behaviors, a set of questions to assess parental knowledge of child passenger safety, and a set of questions to assess attitudes regarding the use of child safety seats. Since both Nationals and expats living in the country drive on the roads and the Qatar government is concerned with the safety of all children living in Qatar, a broad sample of Doha demographic was covered. The data was collected from a variety of parents living in Doha, such as Qatari nationals, Arab expats, European and North American expats, Asian expats, and others living in the country.

The study revealed low utilization rates of child safety seats amongst Qatari citizens, Asian and Arab expats. For those reported the usage of child safety seats, the percentage decreases with each additional child, and as the age of the child increases. It was found that despite parents acknowledging their substantial benefits for in-vehicle child protection, the mainstream behavior is to not use a child safety seat. The societal norm was also not to use safety seats. Furthermore, several behaviors were found to be associated with the use of safety seats as the use of seat belt by parents. This may indicate that the creation of mandatory car seat usage legislation in Qatar would not necessarily translate to compliance, as current seat belt law is disregarded. Another research recommendation is that immediate intervention research take place as it is vital to increase children safety seat usage in Qatar. An understanding of what would oblige more parents to use safety car seats is crucial.